Not that I speak in respect of want: for I have learned, in whatsoever state I am,

The positive attitude spoken of by Paul in this verse did not come naturally. He states that it is a state of mind, will and emotion that is “learned”. Such contentment with any situation, is learned during trying times by trusting that God is in control of the circumstances. With that mind set, one can truly have joy and peace in the midst of a storm. By building one trusting experience upon another, our faith in God’s gracious care of us is increased. By trusting God, we build the attitude of contentment that Paul showed in his life. Please pray that no matter what the future holds here in Japan as it rebuilds, as dollar/yen values change, as our bodies go through various challenges that come with time, may we continue to be content in this ‘state’ while carrying on with the work here in Teshio and surrounding areas.

We apologize for this late letter but our main computer for doing prayer letters crashed and it is still in the shop down in southern Japan and we are praying it can be fixed or everything saved off the hard drives at least. Meanwhile we can at least get a hard copy letter off to our churches so you know how to pray. We don’t ever take you for granted and need that continued support. Thank you for being a part of this work through intercessory prayer on our behalf.

The summer turned out differently than first thought, but we know we are in the middle of

God’s plans for us at this time. These two months have brought about various opportunities for witnessing that maybe took us by surprise but never God!! Praise Him for that! Ken’s time in the hospital for the first of two kidney stone surgeries gave more opportunities for the written Word to be handed out as well as verbal testimony. One of the great joys of that stay was to see several of the nurses that were on staff two years ago when he had his first surgery. One of them quickly showed Ken that she still carried his verse cards around behind her name tag!! Besides new room mates to witness to he also could continue witnessing to his doctor who by this time knew the routine and when making rounds would immediately pick up the daily verse card and even hand them out to whomever was with him. The tracts provided by the Herbster Brothers and a church in southern Japan were also used to give the message of Hope that only Christ can give!

Although surgery is never something to look forward to, Ken always enjoys this special time of hospital evangelism. He has continued to have some side effects from the damage of the stone on the one side where a stent had to be put in place. He has a check up this week (07/21) and we will find out more and also trust to put the dates for the next surgery in place. It would be helpful if it could be done during school summer vacation (until 25th of August) so no extra time would be taken off from school.
Another special friendship picked up after several years of no contact was with a doctor’s family we have known many years. Their oldest daughter is a bud 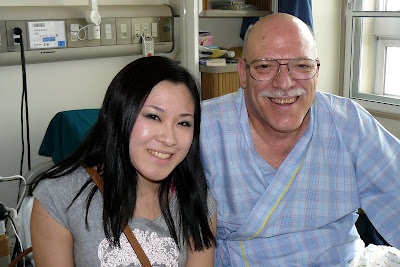 ding concert pianist and she has been accepted into the Boston Music Conservatory for study for 3 years. She was back in town with her family one more time before leaving for Boston where she is now. She was so excited to come see us while we were at the hospital. Many times when Japanese are away from their own cultural environment and the chains of religion and superstitions not quite so tight, they are more open to the Gospel. Please pray that God will lead some Christian young people into Rie Urayama’s life that would continue the witness already given and she would be saved.

This month we say goodbye to a very special young man whom Ken has been able to mentor for the past year. Christopher Collins has been teaching as an ALT in Enbetsu, one of our outreach towns. It was a year contract and he just had his last Sunday with us. This young Christian (only saved for two years) has just taken in the Word of God as a sponge soaks up water. It has been a time of comfort and blessing to be able to have him in our lives and the ministry for this time. His efforts in Enbetsu to get the Gospel out through tracts and especially verbal witness will not come back void as God has promised. We have had a couple various ones come to services as a result of his invitation and trust there can be more contact with them. Pray for Christopher as he returns to his home town in Vancouver, BC and his desire for more Bible training. 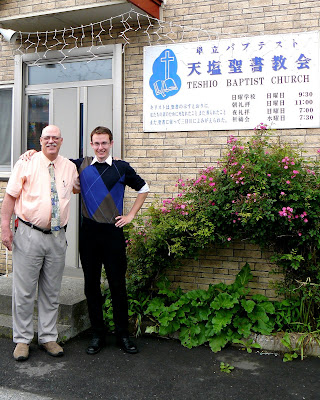 Another special group of young men has been helping fellow missionaries in another mid-Hokkaido town. Brother Minks and these young men also came and helped Ken with a special outside project for two days in June. As a thank you to these young men and Christopher, Ken and Brother Minks took them to the mountain island of Rishiri right off our northern coast. Ken was chief chauffeur and guide, chef, and keeper of the camp! He would have loved to have climbed the 1720 meter mountain with them but knew that would be foolish at this time. All five of the group though made it to the top of the mountain climb and thoroughly enjoyed the view

from the top. As a group they were able to cover one town on the island with over 400 tracts. But the special opportunities came right in the tent campground. One single young man who was motorcyclin 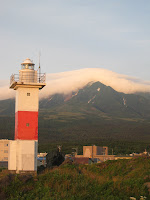 g the area sat in conversation both one on one and as a group several times over the 2 days there on the island. One young lady who was attending our evening service here for about 5 months is now the health teacher at a junior high there on the island. She also came over and ate supper with the group the last evening and more witnessing given to her as well. She has been sent now, a Daily Light, to help encourage her to read the Word of God a little bit every day. Please pray for Mr. Ito and Miss Hanawa that the Word would continue to work towards their salvation in the days ahead.

The warm summer months may bring more opportunities that we know not of, right now, but we know God will give us wisdom and the words to say when the time comes. God bless your days of service for Him RIGHT where you are!! We are ALL ambassadors for Christ!!

Just A Prayer At Night
About the author