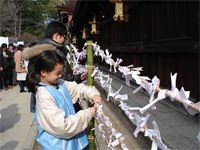 Well we have been busy getting the roof of our building painted to help it ‘last’ another year. We sure appreciate the help of a fellow missionary and his son in this work. Probably the last time we’ll be able to put off getting the roof replaced. It is still the original roof even after 15 years and when we are only a block from the Sea of Japan with all the salt air on a tin roof, well you can imagine what it has been to keep it up all this time.

There is no clearly defined border between superstition and religion, and they are essentially cultural cousins. A definition of superstition, such as “a belief in something not justified by reason or evidence” would certainly be some people’s definition of religion. Every day Japanese people will observe one or more of the many superstitions that are ingrained into their culture. Many relate to death and funeral rites, others to major occasions like weddings, while others are just little more than old wives’ tales.

Still, superstitions are a part of many Japanese lives governing what they do from day to day. It is almost as hard to help them get away from that once they are saved than just helping them understand there is only one true God!
One site claimed this and we have sensed this many times:
Japanese superstitions are rooted in the culture and history of Japan and the Japanese people. Superstitious beliefs are common in Japan; many are related to the atom bomb, but even most of those have roots further back in Japan’s history.[1] A number of Japanese superstitions have their basis in Japanese custom and culture and are meant to teach lessons or serve as practical advice.

Some superstitions that are common in Japan have been imported from other cultures. The unluckiness of a black cat crossing one’s path is one notable example. The Japanese also share superstitions with other Asian cultures, particularly the Chinese, with whom they share significant historical and cultural ties. The unluckiness of the number four is one such example, as the Japanese word for “four” sounds like the word for “death.”

Even though many young people may not know why they follow certain superstitions these are some of the superstitions that may govern their lives:
No nails trimmed after dark–If they do they say that will not be in time to arrive at their parents’ death-bed.

Do not serve 3 slices of pickles–While three is considered to be a lucky number, they never serve three slices because the Japanese word for 3 slices homonymously means ‘killing a person”.

Always put the left side of clothing over the right–To prepare the body of a dead person the kimono is put on with right over left.

Many older Japanese believe they should drink tea in the morning because if they don’t they may meet with some accident during the day.

Japanese believe that all days are either lucky or unlucky. Therefore, a traditional Japanese calendar will have written on the day whether it is an unlucky or lucky day. That way people preparing for a special occasion such as a wedding or funeral will avoid those days. If a funeral is held on “friend-taking” day they believe that there will be another funeral right away in the same family. If it has to be held on that particular day then a doll is put in the casket to ‘take the place of the one whom death would otherwise claim’.

They do not pass food from one set of hashi (chopsticks) to another set. At a crematory the relatives of the deceased will pass the cremated bones from chopsticks to chopsticks when the ashes are putin the urn. So it is never done on an ordinary occasion.

Whistling at night is said to be one of two things: a burglary or a snake will come out and get you.

Engi, which, broadly translated, means the ascribing of lucky or unlucky omens to things or happenings, includes perhaps the greatest number of popular superstitions in Japan. For instance, Japanese believe the ages of 19, 33, 42, & 47 to be unlucky years when person should expect some serious mis-fortunes to happen to them. This may be taken seriously enough that a person who has great responsibility will step down during that year so they don’t draw unlucky events to the whole company. These are usually based on how the number sounds in the language. The Japanese pronunciation for 19 can be taken for “repeated sorrows”. the number 33 is a bad year because its sound also means “hopeless miseries”; 42 signifies death.
Special holidays have very signifigant foods and traditions that must be followed in order to avoid bad luck. Thus, there are bamboo wreaths put on cars and buildings at New Year’s and they eat special foods to bring certain good luck.
A special food eaten is “mochi” (pounded rice) which also can be read to mean wealth; a type of type of mushroom means “many children”; the word for one of the beans means “good health”. Another food superstition is that many will not eat only one bowl of rice (there is a particular shaped small bowl that rice is always served in) because only one bowl of rice is always offered at the family idol in the home or graveside. Therefore, they will at least eat two.
There are far too many superstitions to write about concerning days and dates. The Japanese follow the Chinese traditions concerning the year of a particular animal such as in horoscopes. Fortune telling is taken very seriously in Japan especially at the New Year. Good luck charms can be bought at temples and depending on their particular meaning they will be hung in rooms in a home (particularly the kitchen and front entry) as well as cars, on purses, etc. In the home they may also be put where they provide the most ‘protection’: against pestilence at the entrance, those against fire near the heating stove (kerosene or wood in many cases), those against thunder and lightning on the ceiling and so forth.
City buses may have a talisman above the driver’s seat to project against accidents.
Most of these facts were taken from a book titled “We Japanese”. We wish we could only count on one hand the number of times an answer to what we are trying to convey about Christianity begins with this very phrase. Mostly they might be just talking about regular customs and beliefs but as you can see , their lives are governed by much more than we would ever be able to imagine.
Although this has been long we trust it helps you in one way to see why there is so much to overcome in this country concerning the freedom from fears and superstitions regaling their lives when they come to trust Christ as their Saviour.