Halloween…so not needed here either

Japanese society has always been amenable to taking things
from outside the country and filtering them through their culture,
sometimes with unusual and unexpected results. Halloween is no different,
and if using holiday images will sell more products they are very happy. 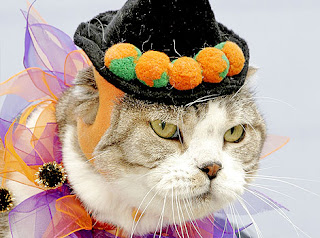 Pets are adored in Japan; some say over-adored. Cats especially – this is the home of Hello Kitty after all. Halloween gives over-indulgent pet owners one more excuse to lavish their pets with love, though from the look of this costumed kitty it may be unrequited. 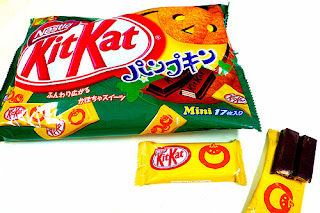 There’s not much you can do to give snacks the Halloween touch… I mean, pumpkin makes a decent pie but not much else, right? Wrong – in Japan, pumpkin is a popular flavor. Who’d have thought the gourd could go gourmet? The clincher  came when Nestle Japan introduced pumpkin flavored Kit Kat bars.

It is believed that Halloween contains many of the remnants of an autumn holiday celebrated by the Druids called Samhain (apparently pronounced “sah-van” though some say SAH win or SOW in–and apparently meaning “summers end”). There historically have been pagan figures with names that are similar to this. But even in other countries there are similar holidays that have to do with spirits of the dead.  The Japanese celebrate the obon,  in which they are honor the spirits of the dead who they believe return home to their families. The obon is a Buddhist tradition and is celebrated from August 13 to August 16. In welcoming back and honoring the spirits, the Japanese place foods, flowers and paper lanterns around their family altars.

A tradition that coincides with the obon celebration is the Japanese folk dance bon odori. The participants of the bon odori dress in kimonos and dance with the beat of Japanese drums (taiko) in the background. There are even sometimes contests for the best kimono style costume.

Is it no wonder that fear can rule this country?  During halloween Ken handed out tracts explaining the origins of halloween and the answer to the spirit of fear.  In one class he taught at a local school, 4 out of 4 students when asked what they are afraid of (for their speech that week), they all said, ghosts and spirits!!

The Bible says “Fear ye not, neither be afraid: have not I told thee from that time, and have declared it? ye are even my witnesses. Is there a God beside me? yea, there is no God; I know not any.  Isaiah 44:8

May we have the freedom to continue to share the true Word of God and the salvation it can bring: not only for the souls of each one but can take away all fear! And may Satan’s lies that include halloween as just a playful holiday be truly brought to light all across the world!
(some information found at: http://inventorspot.com/articles/halloween_japan_eight_crazy_frights_18399 )
About the author