This verse is a great encouragement to missionaries in Japan.  Much effort, prayers and energy go into giving the gospel to the Japanese.  Yet, the visible results are seen far less often than we would like.  Therefore, we continue on by faith, rejoicing in the substance of the thing we hope for: the salvation of the Japanese people.

Ken had the blessing of another hospital evangelism time at Idai Hospital in Asahikawa, Japan in late November.  This was his third kidney stone endoscopic surgery this year.  Each time there has been more open response to the verse cards and gospel literature Ken gives to the doctors and nurses each day.  Again this time, God had some particular people in the hospital at the same time.  Mr. Tan (70) was a roommate and asked many questions about Christianity.  Ken was able to help him understand the truth in many areas.  Mr. Kawana (grape farmer) who was in the hospital over two years ago when Ken went in for his first kidney surgery was on the same floor.  His health is continuing to deteriorate.  He listens politely to witness but no response, yet.   Miss Ohara is a student doctor, there for only that week, who was assigned to his case so Ken had many times of witnessing to her.  A fellow missionary’s wife in the area brought Ken some delicious brownies.  When he gave a brownie to one particular nurse who was trying to use some English, she said that they were more than delicious and wanted to know a word to use to describe the taste.  Ken taught her “amazing”.  Later Ken thought about how that could be connected to the song, “Amazing Grace” (the tune is very well known in Japan, just not the true meaning)  but was not sure if he would see her again.  The day of his release from the hospital, that nurse walked into his room!  Ken was able to make the connection between the “amazing” brownies and God’s Amazing Grace and the meaning and background of the song with her and Mr Tan.  Ken did not “see” what was going on in the hearts and minds of the people he witnessed to in the hospital, but by faith we hope for the Lord to produce the substance of salvation for these dear people.
We reported earlier this year that Vicki has been asked to participate in a small group of people that meet about 3 or 4 times a year to discuss town issues and how to help our town maintain and grow—a constant struggle for small communities in this country.  We know that God has allowed this for more participation in even small matters and look forward to seeing how we can share the light of God’s Word even in these meetings. Although the last meeting held for this year was mostly a business meeting it also included visiting various shut down country elementary schools that were a part of the local school system until the number of children dropped so that keeping these schools open was not feasible.  One of the schools still had pianos just ‘stored’ there which were even still in tune after 10 years.  We are praying that maybe there will be fellow missionaries that can benefit from these unused pianos that seem to be there for the taking.
Each year we are judges for a Jr. High English memorized speech contest in a city about 2 hours from here.  This year this last hospitalization ended up being at the same time that we had already committed ourselves for this opportunity.  Vicki was able to make the trip and carry on for both of us and ended up being the only judge for the afternoon.  This year we handed out a couple different items to each participant including the English verse calendar we like to give to English enthusiasts, as a booklet and pamphlet that we trust will work in hearts in the days and years ahead. 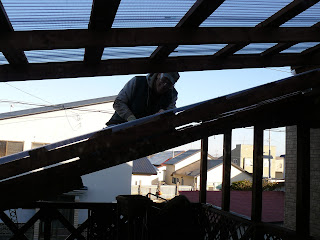 Praise the Lord before winter really struck and Ken had his next surgery, he was able to get all the pre-winter work done on the deck for needed repairs and winterizing.  Funny how each year it gets a little more challenging to keep up with that.  Praise the Lord, too, that the van got all repaired just in time for a major trip we had to take 6 hours south for some paper work AND for one of the fellow missionaries to borrow the car to make it here for the missionary fellowship.  There have been some special gifts given towards the expenses of the van repair and the replacement of the boiler for water and heat for which we are truly grateful.
We also host the yearly thanksgiving missionary get together for this northern end and enjoyed having 33 of us altogether for one day.  These rare occasions (usually 2 or 3 times a year at most) of fellowship, good food and fun help take away the loneliness we can have in missing family during various special seasons.  Again this year, one of the military church pastors in southern Japan helped us get the turkeys and a ham from the base store so we only spent about $30 for each item instead of $80-100!!  Helps you appreciate your special meals you have during this winter season.
We are thankful for so many things that we cannot even begin to list them all here.  God IS good ALL the time, no matter the difficulties or challenges that come our way and we truly thank Him for our daily lives and His provisions in so many ways, including our supporting friends and churches.  May He continue to bless each one!
Prayer Requests:
1.     Salvation of unsaved family members of our believers
2.     Open witness amongst families of secret Christians
3.     Miss Tsuzuki’s salvation
4.     Safety in traveling through winter months—roads always have snow on them here. No salting done.
5.      More to come to Sunday services after personal invitations
6.      Praise for Ken’s surgery and the witnessing opportunities taken
7.      Praise for many jars of applesauce and apple pie filling in the pantry after receiving free apples
8.      Prayer for continued healing for Ken as he fought a fever for 5 days after the surgery; recovery is slower
9.      Preparations being made for Christmas Evangelismthrough the yearly program (held on 23rd of December.)
10.   One of our believer’s mothers passed away. Praying that Satan does not use this to discourage Mrs. Hashimoto
11.   Business to pick up for Mrs. Sonoda’s husband in his job as local plumber.  For her to be encouraged even when the bills are not getting paid.
12.   Need for contacts for pastors & churches on the East Coast (if you can help in any way, we would appreciate it!)
Serving Christ Together,
Ken and Vicki Mansell

Just A Prayer At Night –

your evening is our daytime 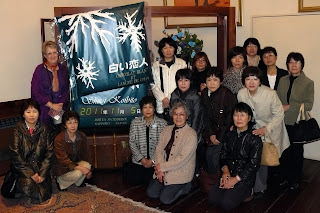 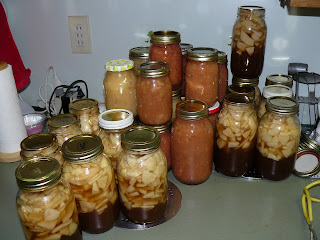 the wonderful applesauce and apple pie filling
About the author