A Hospital Day in Japan 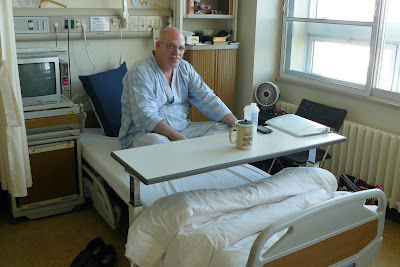 The hospitalization saga has begun! We though you might like a small window view of ‘life’ in the hospital before surgery and then after.
In case you get queasy while reading details…we won’t go into deep details but just enough to make it interesting…does that sound like a plan?

They asked us to arrive before noon on Thursday so we managed that by 30 minutes! We were greeted at the check-in window and you could tell that the girl working there was probably thinking pretty fast, hoping that we COULD speak Japanese. Being reassured she started working out the details which was very simple and then called one of the volunteer workers to take us to Ken’s room. He was an older gentleman and was easy to talk to and even joked a bit (unusual for many Japanese), used “Please” and then quickly told us he didn’t speak English.
Much of that first day has disappeared into our memory but here are a couple fun points: one look by the head of the nurses station and she says, Boy you are tall…(turns to another lady) and says, We better find the one longer bed we have. It was longer by about 6-8 inches and still barely let me lay straight out and if I stretched I did touch the bottom rail.
We offered the fact that we did have a home made gown in case the hospital wear was too small but it ended up it just fit me although they were concerned that it was uncomfortable. Vicki helped me set up ‘housekeeping’ storage of my things (a unit on the wall by his bed)–see picture enclosed–
then I took the bottled sports drink and a name card to each of the other two men in the 4 men room to introduce myself. A couple different times I was able to mention “the one true living God’ in conversation although not alot was said to or by these men that day. I had prepared verse cards to take with me as well as tracts so shared a verse card with these men and a portion of what I had learned from my devotions that day in a simple form that included the ‘God of heaven and earth’.

Vicki took her leave by 4 because it is about a 30 min. drive to the Zemke’s house if there is no major traffic or light changes. And because they were all attending (Sorry Ken!) the city firework display that evening. Might include a finale video clip of that..majorly nice!–side note, firework displays in Japan have a running monologue of titles added to ‘sections’ of fireworks with titles and what businesses contributed towards that section of fireworks.

Vicki intended to go straight from Zemke’s home to Teshio today because she had to return for a practice with her taishogoto group due to a concert on Saturday. In the afternoon though after she left, the surgeon showed up and desired to talk to both of us. Beings she wasn’t returning last night he asked that she be available to hear his explanation today before she returned to Teshio. Vicki arrived by 8 and we met with the doctor at 8:30.
Dr. Kato is the main surgeon and the urologist that I saw in the first examinations here at this hospital will assist. Dr. Kato had a white board and a board for showing x-rays so he went over the 3 procedures again and why the 3rd choice was chosen–laporoscopy instead of ultrasound crushing of the stones, etc. We had heard all this before but he wanted to make sure we understood. Then he also used pictures to show where he hoped to go into Ken’s back (after general anesthesia for him and a ‘local’ to the organ area). He said the main concern is that the long thin needle inserted first to find the stone is long enough for a larger frame body. During this explanation we also found out that the 2nd stone (other kidney) is up in a high area that is close to the lung and the liver so they are concerned that it might be in a place it really isn’t accessible at this time because of the danger of puncturing either the lung or the liver. So he wants to wait on that one completely for awhile to see if the pain warrants further investigation.

I was able to tell the doctor that I am sure he will do fine and I have great trust and would be asking the creator God to guide his hand and this actions to do the right things. He thanked us for that. Another item that was new to us is that there is a possibility that the long needle would go into the wrong place and introduce blood into the kidney so that the stone cannot be seen. Then the surgery has to be postponed a bit until they can get the blood taken care of. A blood transfusion is also prepared in case of this. So appreciate the prayers you can also send up on the doctor’s behalf that all would go well. The surgery will probably take between 2 1/2 hours to 3 hours. I will walk myself to the surgery room! Then they start the IV anesthesia.
Today the anesthesiologist and an assistant both visited me. The assistant asked various questions that would help them understand what to do for anesthesia and how much etc. It included if there were any family or relatives that had ever died while under anesthesia.

My head nurse for today was Mrs. Korobe and she is 7 months pregnant with their first child, a girl. She mentioned that her husband was already worried about it being a girl because this world is such an unsafe place and has strange people in it. I was able to share the verse from Romans again about not being conformed to this world and that Christ could renew a person so they wouldn’t want to be involved with the world. I also had a chance to reminisce with her about the wonders of creation by God in a new baby with full fingernails, a complete body and the wonder of a birth. She was the one that walked me down to the x-ray room so I had some time with her both going and coming back.

I was taken to the x-ray room but it was a special one…it was called TV x-ray!! Can you guess why? It did a double job–I had an IV put into me with a special medication (I hadn’t been able to eat anything after 9 the night before and nothing to drink after 6 the next morning) that helped the kidneys be ‘seen’. As this medication flowed through me, they would watch a monitor up high like a TV and as the images went through if the doctor wanted a specific x-ray, then he would ‘take’ it as he saw it. I was put on a very high table with the IV in my arm. Every 10 minutes a new area was looked at. The x-ray nurse was also married and I got to tell her about being married for 35 years. She made a comment on how long that was and were we still ‘lovey lovey’?? I replied yes, we were and the main reason was because we knew Jesus Christ as our Savior and we had J-O-Y! We put Jesus First, Others Second and You (ourselves last). She found that very interesting.

I had blood drawn twice today as well as the TV x-ray and another ultrasound…I have had more of them than most pregnant ladies do in 9 months! They did this today mainly to help them pinpoint where they would be inserting the needle. After they have inserted that and found it is the right path (if it isn’t, they take the needle out and try again) then they enlarge the path and put in the tube to insert the instrument.

Two other men (anesthesiologist and paramedic) in training have asked to take part in at least the beginning part of the surgery where the tube is put into my throat for anesthesia because they will be using that technique in their job eventually. Needless to say I said it was OK.

Another interesting part to my day was the trip to the surgery room!! Unusual you say…hmm I think so too but it was because they were all worried that I wouldn’t fit on the table or that there would be enough room to really navigate around. So we did a test run so to speak! They tested my laying down, the different angles and where exactly my feet and hands would go. So all is set!! Another interesting note is that the original doctor at the same hospital as Dr. Satoko who has helped us get started in all this, called today to make sure I was being taken care of alright and that everything was on schedule as planned! Sometimes it ‘pays’ to be a ‘gaijin’!! (foreigner)! For example, they have even gone to the extra effort of writing pages of notes about the surgery (we had to sign them that it had all been explained to us) and other papers brought to us have had special notes hand written in simpler Japanese so we could read them. With over 5000 Chinese characters alone used in the Japanese language it takes a high school diploma to be able to read a newspaper!! Can you imagine trying to read these papers??? It also included pages of what is going to happen over the next 3 days; when I’ll be able to eat and when it will change to just IV’s; the schedule for Monday, etc. So they have been so helpful and are bending over backwards to make sure I am in the know! Surgery room note: there are 11 surgeries and for the most part they are always full!!

Fun stuff:
my main meal today; rice, fish, miso soup*fermented soy bean soup with white mushroom*; cauliflower, sesame seed, & bacon salad; pickled cucumbers; They also bring the meal to you but you take it back to a rack in the hall; lady then brings hot water or hot tea afterward;

I sign up for the shower room or bath room (two different rooms) on a white board; and when you go in, you turn a card so it says whether you are a man or woman in the room;
wash hands all the time and use antibacterial lotion
they take down detailed records each day on a laptop that comes with them to the room of what you ate, restroom visits, blood pressure, temp, etc.; I am also required to write all this down on a sheet of paper.
They wake you up at 6 a.m. & lights out at 9 p.m.
I have a TV and small frig by my bed but you always watch the TV by ear phone and both of those have to be ‘paid’ for with a pre-paid card you slip into a slot.

Well that takes you through the beginning of my saga! Keep coming back for the continued story!