Is summer almost done in your area of the world? Do you feel like time is rushing by and you don’t want to go that fast? Or has it been a slower paced month and you can report much done and some time taken to reflect on God’s greatness and goodness as well as vacation time enjoyed by family and all. Well let’s talk about the month of August or the “Augusts” of our life here in Teshio. Do you ever wonder if missionaries have months where it is hard to give a report for the month because they don’t feel as though anything ‘big’ has taken place? Many missionaries are in bigger cities and in countries that have people always flocking to at least hear the Gospel. Other missionaries are in countries that labor day after day never knowing if their witness is really getting through even though they have people coming to church and programs. Then there is . Now there are parts of (larger metropolis areas) where you have new outreaches and contacts almost all of the time but it still takes time to cultivate that relationship and see that person POSSIBLY come to Christ. Then there is the challenging effort to disciple them in a culture where almost everything is against Christianity in some form or other because culture and religion are so combined that they may not see the difference and don’t want to change in some areas because it’s “just culture”. There are other challenges to the discipling but we’ll keep with one this month.

Not only the Japanese of the metropolis areas of Japan need Christ—the country folk do too, but here is where the rubber meets the road…can we stick and stay even though we may go day after day, week after week, fighting the ‘current’ of daily life, customs, and small town closeness that other pastors and missionaries might not face quite as much. On the other hand even in a small community, as in the case, of Mr. Kishida, the ‘hand’ of family hierarchy reached out from thousands of kilometers away (his parents live in southern Japan) to grab a new Christian man in his early 30’s and somehow scare him into pulling back his commitment to Christ. Many westerners have no concept of that challenge.

So back to the month of August….why is it a hard month to tell about—because it is the month of summer vacation for schools and many company employee vacation times as well as the Obon practice for 3 days of worshiping your ancestors. It is a month of distractions in an already difficult field. Our outreach amongst schools as well as private English classes comes to a halt. That is a good thing as we also need that break away from the frantic pace of each day and week but it is also means we have less contact with the Japanese people. Therefore, we have concentrated on other things this month. Part of the regular schedule each week is for Ken to go to Shibetsu (2 1/2 hours away) for two days to help fellow missionaries completely renovate the inside of their older building for their ministry including living in the building and having a portion of it be used for the church part of the ministry.

This month, Ken has concentrated on upkeep on OUR building which all homeowners can comprehend. Our building’s renovation took place over a period of 3 and half years beginning about 20 years ago. Needless to say there are things that need to be done here as well. One of those things was to renovate a portion of the dining area wall as well as reframe our 3 large windows in the dining and living area (we have one great room—living, dining and kitchen with no divider walls). This was done mainly because we discovered ants had been making their home(s) in the wall around the dining room window over some period of time it looked like. They had eaten away plaster board and had ‘paths’ all through one support board. What Ken thought might be a basic clean up job turned into a major re-haul of the wall around the window and a couple of the main pieces of wood as well as the aesthetic parts (framing of the window). It is now completed and we haven’t seen an ant since, Praise the Lord!

The other big upkeep job was in one of the two outreach buildings: a small pre-fab one room building we bought 2nd hand several years ago and put in the little town of . This is the town where Mrs. Tokumaru was reached for the Lord as well as former member, Mr. Shimizu and family. Ken noticed over the last couple months of teaching in that room that the floor was ‘giving’ in some areas as people walked across the floor. So he took up the floor and tore apart the entry area to get to the flooring there as well with two fellow missionaries helping him. They had opened up the time space of two days in order to help Ken get this job done in good order. Unfortunately, as with the ants, after they got it all torn up they discovered the main reason the floor was ‘giving way’ was because several of the steel side to side supports had rusted away on one side and given way!! So that meant he had to call in a welder to help. Therefore, the work the men had planned on doing had to go on hold until the welder could finish his job. Due to other schedules already set in place the two men were sorry they couldn’t come back and help again. We do praise God though that the welder in town could get to the job right away and by the next week, Ken was back at work getting the flooring all redone again. One of the two missionaries was able to come up on the final day and help Ken get the next to the last stuff done before the final flooring that Ken could lay back down the next day. Another much needed job accomplished during this month.

Vicki had planned on getting quite a bit of sewing done in her ‘Dorcas’ ministry but God had other plans for her—she came down with a herpes virus infection in her right eye, a flare-up from about 22 years ago. She lost some of the sight in that eye due to the first bout with the virus over about a 2 year period. This time the scratches (2 small and 1 large) were just on the surface and as of yesterday the doctor said he thinks it is cleared up but wants her to continue to antibiotic drops for one more month to make sure. Then we will see if it comes back or not. So for about a week’s time she was not able to do much of anything and then only with sunglasses on and all the shades in the living area closed so the room was darkened. The eyes tired very quickly as well so the things she did were in short spurts and sewing and some other things came to a halt. A week ago she added another injury to the ‘need-to-heal’ list by trying to cut off the tip of her little finger while slicing onions for supper. Those four stitches should get to come out on Monday the 1st of Sept. Amazing how careful one must be when the tip of one finger is all bandaged and very painful. She was just thankful to have enough skin attached still so the doctor COULD stitch it.

Can you endure this report for one other very enjoyable part of our month? We have been very close friends (we are known as Uncle Ken and Aunt Vicki) to fellow missionaries about 2 hours away, the Smiths. Their eldest child and only son contacted us about a month ago to see if we could help him surprise his family with a trip back to Japan and bring his fiancé (he proposed to her in his home town in Nayoro) to meet his family. His parents were brought into the loop but his sisters kept in the dark so we had the privilege of going to the airport (5 ½ hours away) to pick Preston and Abi up and take them back to Nayoro to pull off the surprise visit. It was wonderful to get to know Abi on the trip and then the Smiths also allowed one day traveling north and we joined them on the way to be their guides for taking them all to the northern most point of Japan, then back along the coast and here for supper before they headed home. That was the day that Vicki cut her finger while preparing the supper with Mrs. Smith. It was a blessing to take part in some of the activities of this family and rejoice with them in this addition to their family, especially because if the Lord tarries, Preston and Abi would like to come back to as missionaries.

An update on the lunch time we had with Mrs. Ueda and her son Ryo—Beings this was the first time we had any extensive time with Mrs. Ueda we went very slow but were able to voice several things about the Living God during our conversation over lunch. We also invited them to services and lunch on Sundays beings she might be able to get away during that time. Her reaction was the sometimes typical covered mouth laugh…indicating I hear you, but I don’t want to answer and I am embarrassed. So we will continue to pray that God draws her out anyway.

So I think you would summarize our month in this way: JOY! —still putting JESUS and His work first; OTHERS—both in helping us and helping and enjoying them, and YOU!—still always being thankful for your faithful part in our day to day ministry here in through prayer, letters, love, and support. We couldn’t continue on without YOU!

Ken and Vicki Mansell Just A Prayer At Night 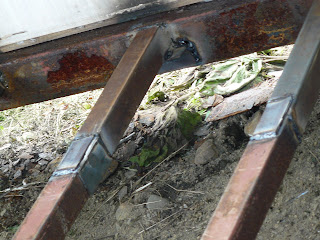 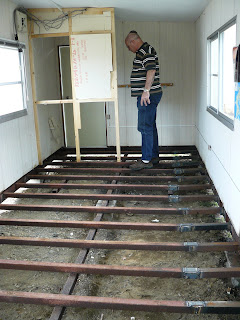 the steel framing in the pre-fab room
that has been repaired and ready for the
insulation and flooring to be put back in.
Upper picture, close-up of welding. 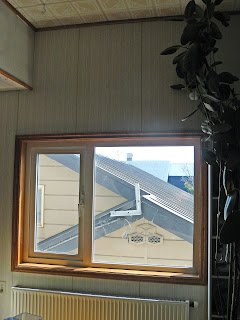 the finished window and wall area after repairs 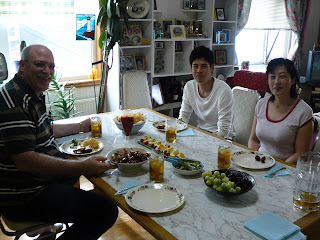 Mrs. Ueda and her son Ryo with us for lunch