Day 9 Move to Teshio or Toyotomi?

You are here:
Many of you may not know how we ended up in Teshio so want to explain how the Lord worked to show us where to go. During our training time, the missionaries we were training with went every week on Sunday afternoons to hold one S.S. outreach. That meant that every other week it was in a place called Toyotomi and the other week in Teshio. We really felt it would be good to start a work in a town that already had an introduction to the Gospel, so we started praying about which of those two towns it would be.
Step One–“driving up and down every street in both towns looking for empty bildings that might work out as possibility for a meeting place and a home for us. One that did look fairly good had been just reented to a company after being empty for three years! God is perfect in all HIS ways!….Toyotomi has a better attendance for the afternoon S.S. than Teshio. Teshio has been the tougher area possibly because it has the largest Shinto shrine in the northern section of Hokkaido. It also has more Buddhist temples than any other northern town. It is an older town and is on the ocean with one main industry of fishing. Toyotomi is a farming town…Despite the difficulties, my (Ken was writing) leans toward Teshio. I can’t explain why. It may be the Holy Spirit directing. This town definitely NEEDS a light to shine in such a dark place!…We will continue to wait on the Lord for His direction and guidance.”
Step Two–Go back to Toyotomi and Teshio to see people concerning possible buildings. “All the buildings in Toyotomi were eliminated and all but two were eliminated in Teshio. ” As a result of the fact that there was nothing available in Toyotomi and the burden we shared for Teshio we continued to pray about Teshio and look for a place to live and work. In the same letter we described the two buildings that could be possible candidates in Teshio. Although the first place was nicer it would not have been big enough for both living in and having services as well. The second one had many possibilities but was just going to take alot of pre-work to make liveable if the owner was agreeable.
The owner of the building, that we were interested, in lived in Tokyo and the house was watched over by a local man who thought that the owner would be willing to rent to us. (There is much ‘working up to’ a situation or ‘need’ in Japan so dealing with this situation was not a one time thing(: To make that long story, short, the caretaker of the building arranged for us to rent it and for permission to fix it up. Then eventually the missionary “..had two meetings with the owner (he had come from Tokyo to work out a deal). The owner is 81 years old. In Japanese fashion the first meeting was simple aquaintance formalities and in the second the owner gave his sales pitch for the building and finally gave the price he wanted for it. ” We have to back up a step here….this activity as we mentioned, took place after 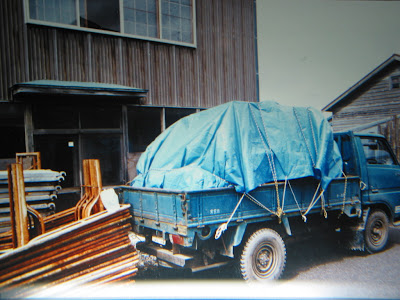 making an arrangement with the man who was watching over the property for us for renting and he also gave us permission to fix up the building to our specific needs (painting, putting down wood flooring in what would eventually be the meeting room on weekends and our living area on week days, building in a small bunk bed set in an upper ‘attic’ room area, etc, as well as stripping the outside of the large building of its rust and old paint and repainting the whole thing. This was all done in and around regular language study and also taking care of some other responsibilities while the veteran missionary was in the States for his daughter’s wedding.
This is what the building looked like on
the outside before Ken started scraping
off old paint and rust. So the ‘price’ that the owner wanted was not a rental price but he said he had changed his mind and he would only sell it….”Mr. Endo, evidently because of his age and hearing that a foreigner was there, decided to sell the building rather than rent. This was made known after two months of time, materials, paint, and transportation expenses being put into the building….” In between the two meetings with the owner we w 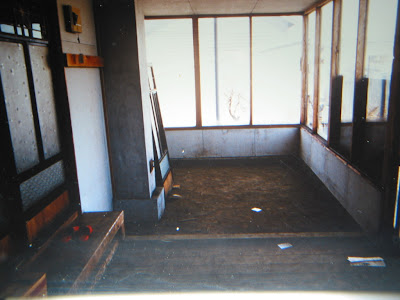 ere in much prayer about what to do with this situation. We knew that God had called us to Teshio by this time; we knew this was the only building in town that was available for use in the way we would use it, and we knew by the time we got word about his change of mind we had put at least $1500 plus time and energy into the building.
What did the Lord do for us?? More on the building in Teshio in our next “edition”.

The front entry way before renovation.

Side stepping for a note of interest—at this time in Japan one had to pay around $300 for the priviledge of having a phone and then about $30 for the installation and 5 cents a phone call for local 3 min. calls!! No wonder we didn’t have a phone for ourselves for the first few weeks we were in our own home. During the searching time for the next step of moving to our own work though, it was worked out that we should and could have our own phone. What a blessing that was just between the missionary family and ourselves. Up to that point if we needed to confer on something we had to go over to their house or them to us to give messages. We didn’t make many phone calls to the States because it cost around $5 for 3 minutes!! Needless to say phone calls for a birthday or Christmas were VERY special blessings to us. What a blessed era we live in now!! –We now can make phone calls right through our computer hook-up so basically you might consider them ‘free’! What twenty-five years of ‘advancements’ did for us!

Second note: at the time we were doing all the work on the building, we were probably getting around 225 yen per dollar and today it is fluctuating between 94 and 97 yen per dollar!! Isn’t it wonderful that God knows our needs and provides no matter what the money standards are across the world!