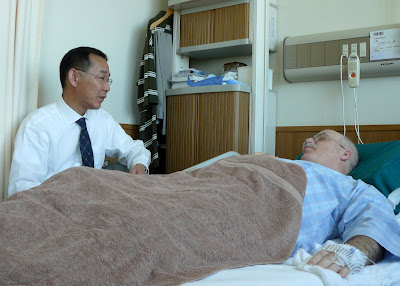 The man we always get our used cars from lives in Asahikawa. We have given witness to him over the years. He came on the last weekend Ken was there to visit him. His name is Mr. Igarashi (ee-gaw-raw-she) 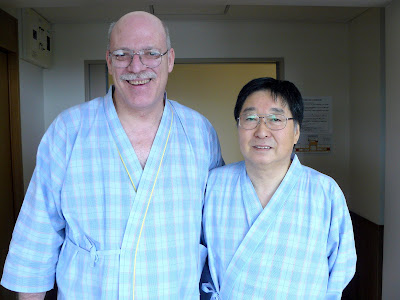 Mr. Minoshima was in Ken’s first room and kept checking in with Ken every day! Several times Ken got to speak to him about spiritual things and the Lord seemed to be opening the door. How hard it was to leave this man as well. We will be keeping in contact. 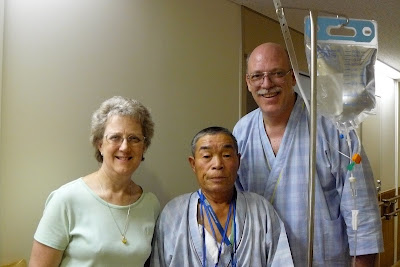 We met this man a couple days after Ken’s surgery. He was in for prostate cancer surgery. Mr. Kawana (kaw-waw-naw) is a grape farmer in the Shibetsu area where fellow missionaries, the Minks, are. We were able to introduce Brother Minks to him just before we left the hospital. How great to know there is a witness that can still reach out to him. He and his wife basically run the place by himself!!

We are thankful to have Ken home. The liver damage was all reversible damage through the medications they prescribed. He has a follow up visit in Asahikawa in one month. They will do blood work and ultrasound then to see how the other ‘stone’ is doing, etc.
You could tell that Ken had not slept well in the hospital because he slept 12 hours the first night and 10 the 2nd!! The hardest part about leaving the hospital was leaving the ‘mission field’ of that time period. By God’s grace we certainly believe we have more freedom in this country to hand out pamphlets and materials without any ‘voice’ repercussions! Ken gave out a ‘daily verse card’ to every nurse, doctor, & patient he had contact with. By the end of his two weeks, several of the nurses had a very full name tag because they would put them on the back side of the tag. With the men he was able to witness to he also gave out other materials. Whether each person was being polite, as the Japanese can be, or truly were glad to receive them, we were just thankful to get the Word of God into their hands in any portion.

The other hard part was leaving Dr. Nao Nishino behind. At least we know there are godly biblical missionaries there that can carry on the ministry with her close hand as we also continue our friendship from afar. She has already started calling us her American “mom and dad”. Although we knew she had been to Canada for some part of her doctoral studies and English study, we didn’t know she just returned 7 months ago!! Because of this fresh memory of her time on foreign soil, that made her so much more open. Please pray that in spite of her crazy doctor schedule she would be able to contact fellow missionaries (Dean & Sue Zemke) so that they can carry on with the Bible study she has already started! Twice at the end in spite of being tired she came to Ken’s room and asked to study the Bible with him. Her heart is open and God is drawing her–may His will be done and another lamb added to the fold! And may we be patient in waiting his timing. Please pray though for each of these major contacts and for Satan to be defeated in ANY way in preventing the furthering of the Gospel being given to them:

Thank you for whirling through these two weeks with us and especially supporting us in prayer.
“In everything give thanks for this is the will of God, in Christ Jesus, concerning you.” –this along with Romans 8:28 reminds us that all of our days and hours, in health or in sickness are a part of God’s plan!