You are here:
Here is a portion from the letter that included the following picture. Ken started working on simple S.S. lessons about 4 months after we arrived. It took quite a lot of time as you can figure out by the following sent to Vicki’s parents: 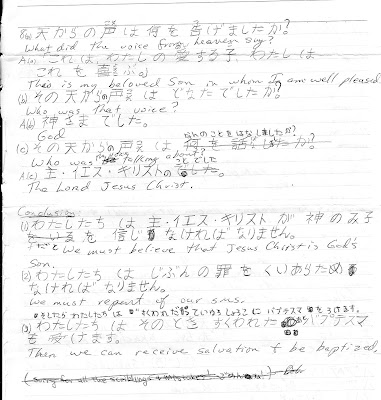 I thought you might like to see what the rough draft of my Sunday School lesson looks like. After working on the Bible passage in English and Japanese, I write down the questions and answers in English. Then with books surrounding me (English-Japanese AND Japanese-English dictionaries, English Bible, Japanese Bible, Japanese language text book, Missionary language handbook) I attempt to translate these questions and answers…In pencil, I write the translation. I then give it to Deborah (the veteran’s missionary daughter, age 17, raised here) and she corrects and revises them as needed. Finally I copy the revised questions into a notebook which I use in class.
So you can see that lessons then took much time, hand writing (all letters to our parents were hand written too), and practice reading the lesson. 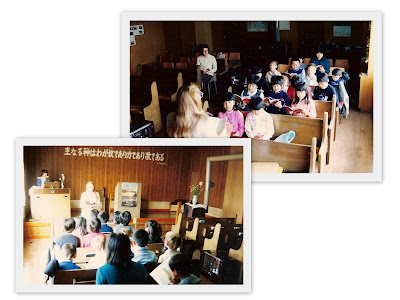 The veteran missionary’s daughter in opening exercises for S.S. Vicki at the small organ. Ken always thought it was unfair that even though we couldn’t speak a work of Japanese when we first arrived, Vicki could immediately play songs in Japanese!

And to finish today, here is another portion from my reminiscing written about 10 years ago:

At first glance much of the area that we saw as we arrived in Wakkanai, the northernmost city of Japan, looks like an older area of a large city might look in America—buildings built similar, but different; roads like ours, but different; signs on the stores like ours, but different; people dressed like Westerners, but different; are you getting the picture—everything was similar but at the same time different. It was that difference that would take some getting used to. Buildings were somewhat the same but usually had a tin roof that slanted to the side or back to allow snow to fall off without endangering someone. Roads were paved in the city but much narrower and many had no sidewalks along side, so people walked on the side of the road instead. People dressed like Westerners but not so much variety: i.e. elderly women wore browns and grays; business men all wore blue or black suits with white shirts and dark ties; students, junior high and up, wore school uniforms; and the signs—well there was English on some of them but most were in wiggly lines that eventually we would come to recognize as one of three of the three forms of written Japanese. And I won’t even begin to mention food right now but we were so thankful to live with the missionary family at first so could learn how to work with the ingredients available in this country as well as be able to eat American type of food sometimes while we were learning.
We arrived in the fall and within one month the first snowfall had taken place. One of the things I remember is how cold everything felt especially in the mornings. Even 20 years ago very few homes had what we would call central heating. Even now many might not but heat rooms within their homes with kerosene portable heaters or ones attached to pipe chimneys. These are only turned on if you are in the rooms and always turned off at night because of fire danger. Also depending on your situation you might have to drain all the water pipes at night and leave the water turned off so the water won’t freeze. *note-we did have to do this for 3, 4 years in Teshio when we first moved here* Then you close them down and turn the water back on the next morning. We would sleep with lots of blankets, socks on our feet and for Ken because he had less hair, a stocking cap was just the thing to keep his head warm. Now I understand why people wore ‘caps and kerchiefs’ on their heads in the pioneer days.

Those first few days were exciting and everything was new. But there was one thing, after a couple weeks, that became frustrating. We were now ‘babies’ who didn’t understand all the customs, the way of life, what was going on around us; but most of all we couldn’t get past the ‘hellos’ of the particular time of day when you were greeting someone. We could greet and that was the end of our conversation without an interpreter. Ken had told the Lord early on in his search for the Lord’s will for his life, that he was willing to go anywhere in the world as long as he could speak English! After allowing the Holy Spirit to work and take that stipulation out of his desires, the Lord lead us to a country with one of the most difficult languages in the world for a westerner to learn. And that learning process required three different ‘alphabets’; two of which had 48 different sounds written two different ways and the third (Kanji adapted from Chinese characters) has more than 5000 with anywhere from one to three readings to each one depending on their combinations. Oh, my, would we ever become fluent? In a mixed group of people talking, women are still supposed to be the quieter one so for me those beginning days and months of not being able to communicate were frustrating but not to the point of anxiety. For my husband, on the other hand, it was restricting and humbling. He had been a youth pastor; worked in several different ministries in our local church while still in Bible school, and also had taught and preached from week to week as we traveled on deputation. Now he not only couldn’t participate in active service yet, but couldn’t even carry on a normal conversation with anyone outside our own family and the missionary family. He had run into a brick wall that almost seemed too tall to climb. Yet in moments of despair and frustration we could only always come back to this one thought: the Lord had called and He would do His work through us if we could only be patient and learn. That learning process is still taking process. People sometimes ask me when we are back in the States, “are you proficient in the language now?” My reply is always, “I will be learning the Japanese language until the day I die, but by God’s grace and the teaching and help of the missionaries that trained us as well as many a patient Japanese willing to slow down in their conversation and take time to teach us new words, I can carry on an every day conversation.” Isaiah 50, verse 4 says, “The Lord GOD hath given me the tongue of the learned, that I should know how to speak a word in season to him that is weary…” We praise God that Ken is able to teach and preach in Japanese although the struggles with any particular unused word at any certain time still takes time to learn and use. But I still struggle with the deeper spiritual language necessary at many times to really get into deeper witnessing opportunities. I want to be able to ‘speak a word in season to him that is weary” so am glad that the Word of God can be shared with anyone even when I can’t say the right words.